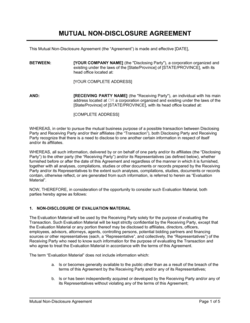 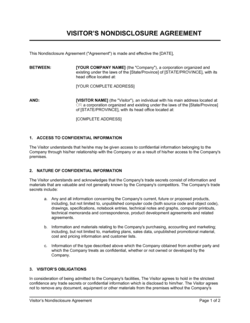 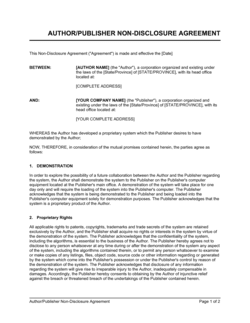 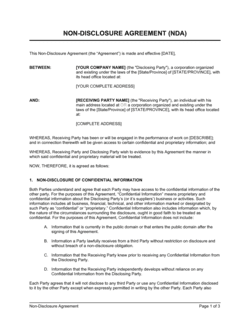 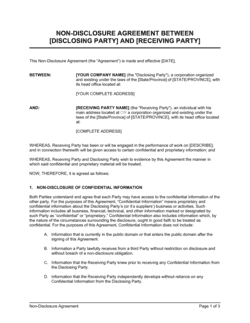 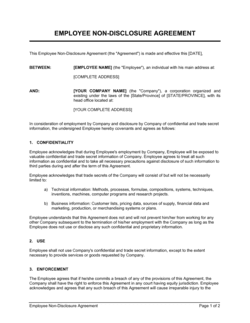 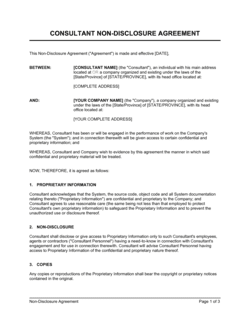 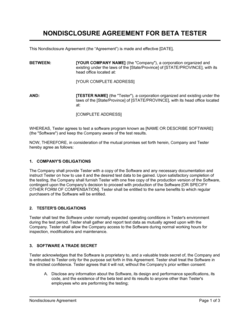 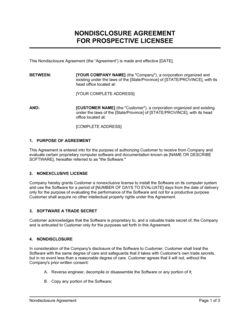 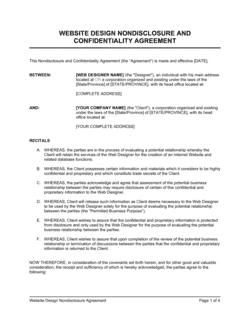 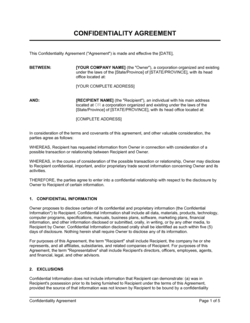 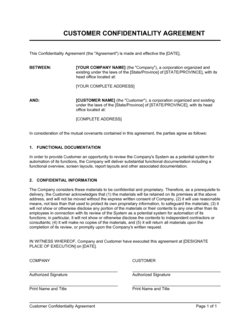 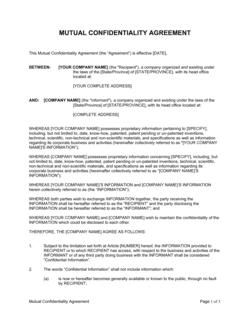 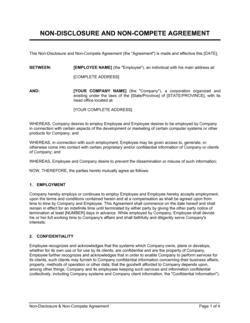 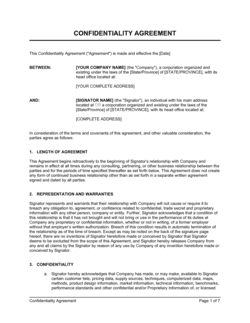 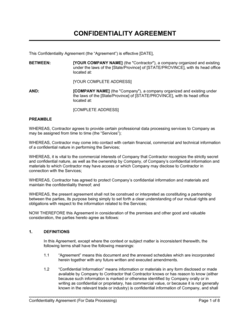 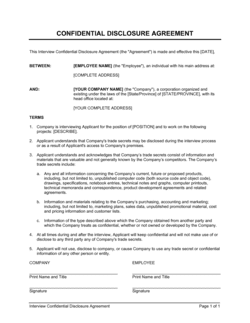 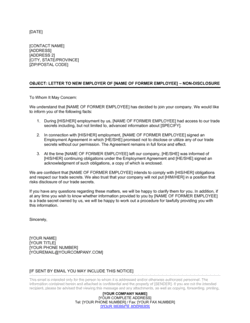 Information of any kind can be leveraged by a person or an entity for their own gain.

This is the reason why organizations find it especially important to safeguard any sensitive or confidential information they maintain.

An NDA, short for Non-Disclosure Agreement is a solution utilized by organizations and individuals to protect such confidential information from being exposed by another party with whom the information is shared. NDAs may involve two or more parties who enter a legally binding contract mutually or non-mutually.

You may also find people refer to an NDA using any of these names:

A mutual agreement that governs the use of confidential information by all parties signing the contract. It requires all parties to agree that any sensitive information acquired from other party or parties will not be distributed further to anyone else.

It is a non-mutual agreement because the company is not obliged to enter into a similar agreement for the employee information available with them. This type of NDA is also known as a unilateral NDA.

Common use cases of an NDA

Some common use cases of non-disclosure agreements are:

Businesses often use multiple NDA agreement templates based on the business needs and the people who have access to confidential information.

Businesses are required to maintain confidentiality in their projects, business plans, and innovative ideas. By keeping such information private, they can gain a competitive advantage in the industry.

Young companies with new business ideas must also practice confidentiality in their business plans to launch their ideas successfully. Otherwise, competitors may use the information to their advantage. These businesses can use an NDA Template to draft a strong agreement that prevents leakage of critical business information.

Most companies require sensitive information to be shared with consultants and advisors who guide business leaders and support business profitability. PR firms use company information to understand the brand they are associated with and to use this information judiciously in improving the brand's market standing. Even vendors and suppliers may have access to sensitive business information that must be protected from being disclosed to others.

The purpose of an NDA is to act as a legal framework that defines specific implications for anyone who is found to be in breach of the agreement. With the help of an NDA, organizations can protect their business plans, innovative ideas, or key business processes from being disclosed to others who may benefit from it.

Legal protection is required since the leakage of such crucial information can impact the business revenue and reduce the value of the project, product, or service being provided by the company.

How an NDA works?

A non-disclosure agreement intends to provide greater security and trust to parties who may not want sensitive information to be disclosed to others. For this reason, an NDA has clauses that include details of the actions that a party may take if it finds the other party to be in breach of the agreement.

These penalties for breaking the agreement are defined by the parties who sign the agreement. In some cases, the penalties may include damages like financial losses for the person or organization in breach of the agreement or criminal charges against anyone violating the contract.

Courts do not see all NDAs as the same either. How it is phrased will make a big difference. A court may enforce it, or declare it overbroad or may see it as void. It is also possible that courts may identify certain parts of the NDA to be out of scope. In cases like these, those parts of the NDA may not be protected by the agreement.

When someone breaches the agreement, you can take action as outlined in the agreement. In some cases, this will involve filing a breach of contract lawsuit. Organizations or business owners may also file for injunctive relief, which stops the person from continuing to share confidential information with others. An NDA template will identify the steps taken by the parties when a breach occurs.

What does an NDA include?

The structure of an NDA will differ based on the parties and the purpose it is being drafted for. There are some parts which usually remain common in all NDAs and boilerplate sections include:

Identification of the parties signing the agreement

For example, a startup hires an agency to design and develop its website and all branding elements, including the logo. The agency hires a freelance content writer to develop literature for the website. NDAs should tell you how to proceed with divulging information to third parties where necessary. They should also mention that the third party should sign an NDA agreeing to the same terms before any information is disclosed. You can check a sample non-disclosure agreement to identify how the restricted use of confidential information is detailed by companies.

Every NDA should have its purpose described clearly and accurately. By describing your purpose, it helps the parties in the agreement understand to which extent they can use the confidential information.

The startup that hires the web development agency may be deemed its website and branding content as confidential because the startup may want to announce its launch through a sneak peek of its logo and its products.

So, the business gets the agency to sign an NDA to ensure that people working on the project do not leak information about the startup's products and services or branding details to the public.

By clarifying the purpose, the agency will also be in a better position to understand why they cannot disclose information to others.

Every NDA template must provide a clear picture of information that is termed as confidential. When the startup shares information with the agency, all of the information may not be confidential. For example, the identity of the founder of the business may already be known publicly.

But if the NDA fails to define confidential information, then any information divulged by that agency will be seen as a breach even though it is not. Courts are likely to void such NDAs because of a lack of specificity.

Provide specific details about the confidential information without revealing details that you are trying to protect. For example, the NDA may protect the website content and the branding content from being leaked by the agency, or any other the third parties engaged by the agency, before the brand is launched.

Elaborate explanation of how the shared information should be treated

Like the agency can ensure non-disclosure by having the web developers responsible for that startup's website development to have access to the company's information only. Other developers will not have access to the information. Secondly, the agency should also agree that it will not use the information for its benefit, like using the startup's unique business idea to start their own business and earn money through it.

Time and duration of the agreement

Once the startup launches its website and brand information, the agency may no longer be bound to the agreement since the information is publicly available, and divulging any of that information may not lead to a leakage.

Sometimes, when businesses exchange crucial trade secrets with others, they may bind the parties by an NDA that lasts indefinitely. The time and duration of the NDA must be set by carefully analyzing how long the information should remain confidential.

What does an NDA not include?

Companies do not intend to keep everything confidential. For example, website content and other information published publicly is not covered by the NDA.

Courts can interpret NDAs based on the language used in it. Sometimes, parties may also be able to prove that they obtained the information before the NDA was signed or they obtained it outside the NDA.

Information obtained through a court order, a subpoena, or through legal means may be considered as a valid means of obtaining the information without being in breach of the agreement.

What are the exclusions to an NDA?

A reliable source for the non-disclosure agreement

It is ideal to use a non-disclosure agreement template for drafting an NDA that will stand valid in a court of law. NDAs are complex. They must be clear and accurate. It is also important to avoid drafting NDAs using conflicting sentences. Business-in-a-Box provides companies with access to over 1,900 templates that cover all aspects of business agreements and contracts. Using our templates, you can draft a solid NDA for different parties or different requirements like employees, other companies, or freelancers that your company may hire.

Signup to get a full template preview and also have access to our repertoire or business templates used by over 250,000 organizations around the world.