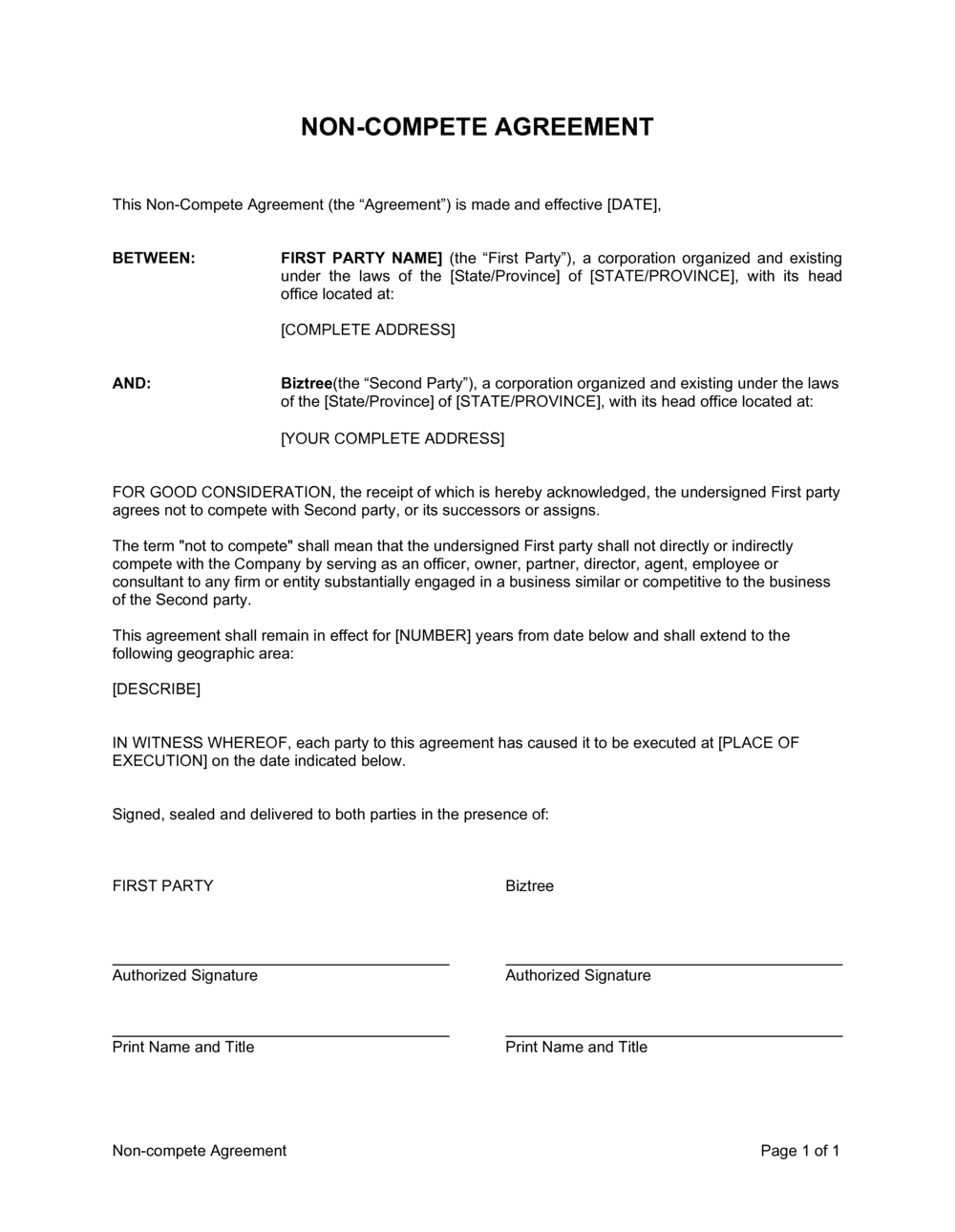 Meta Description: - Download our non-compete agreement and gain access to a comprehensive legal template that will protect your company’s trade secrets.

In today's fiercely demanding business environment, it is critical to ensure that any aspect of your company is secured from losing proprietary information when you must let go of an employee.

In most companies, general non-compete agreements are standard, and in places where they are enforceable by law, these agreements are used in most work arrangements for specialist jobs and top management.

What is a Non-Compete Agreement?

A non-compete agreement is a contractual agreement involving a company and an individual where the worker may not partake in certain work-related activities that start competing with or overlap with their current venture.

Non-compete clauses are used by businesses to guarantee that their employees may not partake in commercial practices that can reduce the company's competitiveness.

Using a general non-compete agreement template in your company will benefit you irrespective of size or the type of business. The manner in which you enforce them can dramatically protect your company from wrongdoing by staff members after they depart your company.

Getting a non-compete agreement drawn up by attorneys or corporate executives can be very expensive, and you'd have to reimburse for any revisions in the coming years as well. Using a template will help you make legal agreements that are enforceable in a cost-effective manner.

The non-compete clauses and agreement templates included in Business-in-a-Box have all been created entirely by legal experts and industry professionals, so you can be confident in their consistency and credibility.

What is a Non-Compete Agreement Used For?

Your field can become heavily competitive, and you, like other businesses, want to shield your company from data theft caused by circumstances such as corporate espionage or workers fleeing your company.

Non-compete clauses will most definitely be used for your management and senior staff so that these powerful figures in your company can not quit and take their skills and expertise to your rivals.

You will also want to discourage sales associates from defecting to your competitors and bringing valuable sales experience about your goods or services with them.

Main Features of a Non-Compete Agreement

Non-compete agreement templates are intended to be a generalized legal document that can serve many specific purposes, meaning that in the case of a disagreement, they can cover both your company (Protected Party) and the individual (Noncompeting Party) fairly. The clauses and deals are written with the following critical facts in mind:

Name and Address Specifics - The firm's name and recorded address, as well as the identity and personal address of the individual signing the document, must be explicitly written on the document.

These particulars, such as defining the territory and region depending on the location and the individual undertaking the non-compete agreement, can help to restrict the agreement's liabilities.

Start Date and Duration - A critical point that many newcomers miss, the start date and duration of the contract must be precisely defined, otherwise the agreement would be unenforceable.

You should bear in mind that there are certain restrictions on the length of non-compete clauses in some territories and states within the United States, which you should take into consideration while completing this part of the template. Give this segment extra thought so that you don't over commit the time period and invalidate the non-compete clause.

Non-Compete Reasoning - Simply using the non-competing party's role or status as the rationale for the non-compete agreement is insufficient. You must explain that the non-compete clause exists in relation to the party's access to sensitive business material such as trade secrets or manufacturing techniques.

The Jurisdiction or Geographic Limitation - Based on the geographical location, you will need to identify the territory or jurisdiction where the non-compete clause would take place for it not to be made invalid based on geographical generalization.

In certain nations (such as the United States), the non-compete arrangement is only valid inside state boundaries, while other countries might have a broader applicable territory. The non-compete clause would therefore be null and void if your territorial region is too big and is considered to have a detrimental impact on the ability of the non-competing entity to make a living.

You must properly understand the territorial limits of a non-compete arrangement, much as you must recognize the length of the agreement, to avoid invalidating the agreement.

Signing Consideration and Compensation - The non-compete arrangement provides the business with a level of security, and because of that, you must give the non-competing entity some recognition or reward for accepting the position.

This may be in the form of cash compensation or stock rights in the company; essentially, you will determine the consideration based on the level of the non-compete agreement that is being negotiated. This may also be seen as a deterrent to quitting your firm, but be cautious that if abused, compliance may be harmful to the corporation.

Signatory Names - A non-compete clause must include the real names and identifications of the negotiating parties to justify the arrangement depending on the extent of employee or contractor disclosure. Be sure that the participants sign the document as well, in order to ensure the agreement's legal legitimacy.

Despite the fact that these are the key material specifics of all non-compete agreement templates, you can notice that our collection of such agreements contains over 60 separate non-compete agreements and other similar models that may be included in your industry. These models are also of the highest quality and well formatted as they’ve been created by legal professionals themselves, so you can use them in your company within minutes of downloading them.

How to Use a Non-Compete Agreement Effectively

Non-compete agreements are legally enforced contracts so some considerations must be made while drafting them for the business. These conditions in the non-compete agreement will aid in protecting the company and staff from liability in the case of court litigation. These are the components:

Important Personnel - In many instances, if a generic non-compete arrangement is utilized by all staff, the extent of proximity to the relevant individuals to your business intelligence would necessitate a more stringent non-compete agreement or provisions within their terms. Be sure you cover the organization with unique non-compete arrangements with various employees based on the degree of contact and publicity.

Region or Industry Specific Laws - Based on where you live, non-compete agreements can or may not be legally binding by state laws and regulations. Your sector might even have strict rules that prohibit or specify a non-compete arrangement for your business.

Flexibility - If you are overly stringent about how you impose the non-compete restrictions on the individual, the non-compete clause can be considered void. So, be cautious not to make the non-compete arrangement too oppressive to avoid legal litigation against your business.

Be sure you clarify what you are defending and how you restrict the non-competing entity when they leave your employment so that the non-compete arrangement template does not appear untenable in the eyes of the local legislation.

Disclosure - If you want to establish a non-compete agreement for your company, the best way to do so is by being clear about your intentions. Convey the purpose and impact to your workers so that they better grasp the justification and security that it offers to the organization, as well as how they would be impacted if they quit your organization.

Keep Staff Up to Date - Inform the employees about the non-compete clause and how it will impact them if they decide to leave the company. You should be explicit regarding the provisions and the plan to execute them if applicable.

Why Use a Business in a Box Distribution Agreement Template?

When you join Business-in-a-Box, you gain direct exposure to over 2000 business templates covering any part of your business interaction and paperwork, independent of sector or venue.

You can protect your proprietary information and company in a lawful and competent manner by using these effective templates based non-compete contracts and clause documents.

For your ease, every one of the 2,000+ company and legal models provided by Business-in-a-Box has been created by industry experts with the assistance of business attorneys. Your company needs the right documents and agreements to function optimally, and you will find them here.

Sign up to Business-in-a-Box to get the non-compete clause and a sense of security when recruiting or dismissing workers. You will draft an all-inclusive legal contract for your delivery network using the arrangement template's wide range of provisions and terminology.

All the Templates You Need to Plan, Start, Organize, Manage, Finance & Grow Your Business, in One Place.

Templates and Tools to Manage Every Aspect of Your Business.