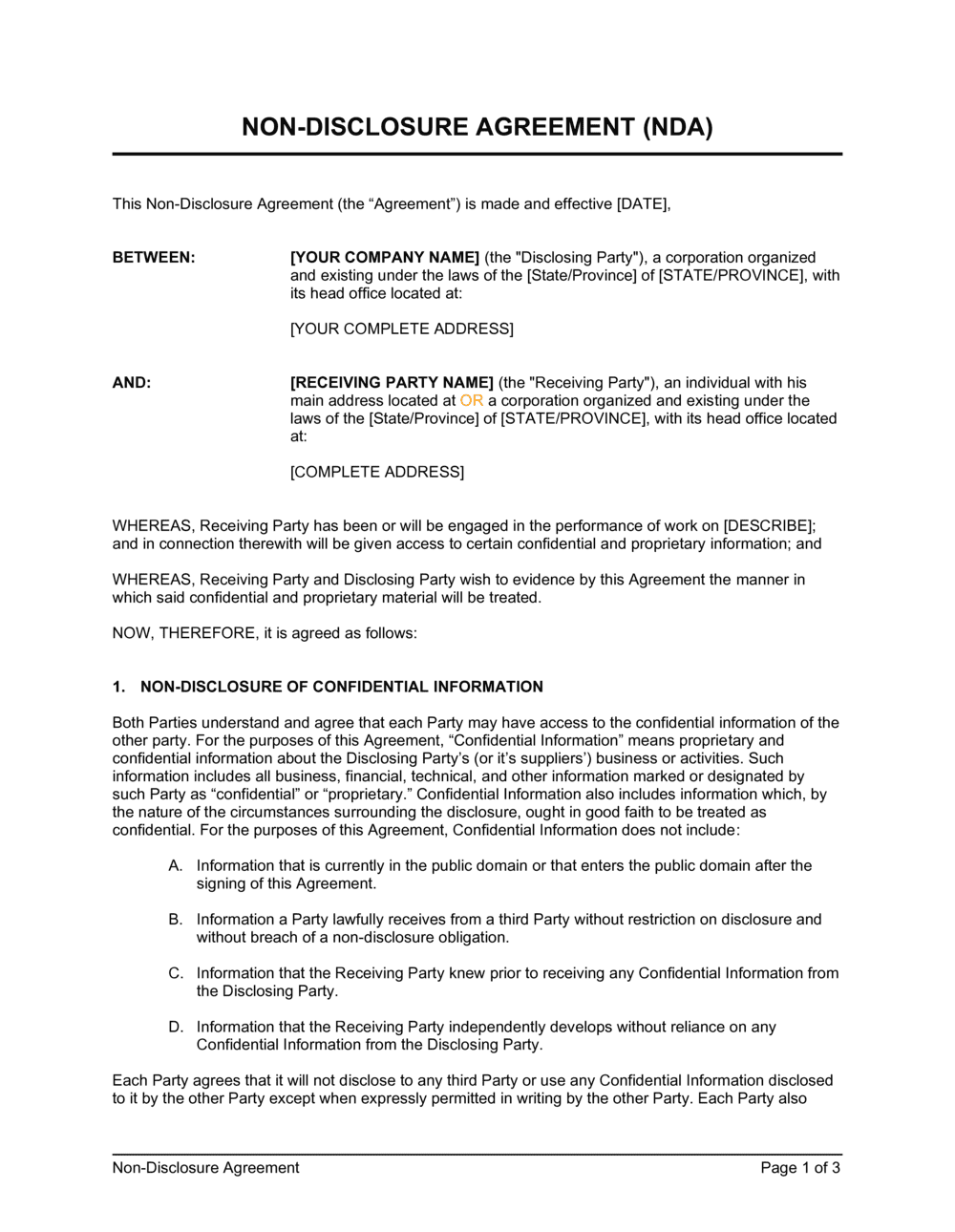 What is a Non-Disclosure Agreement (NDA)?

In an era of competitive markets and ever-growing industries, there is no such thing as being too cautious. NDA Templates, short for Non-Disclosure Agreement templates, are legally binding contracts between a receiving party and a disclosing party that prohibit the signing parties from making a certain piece of information public, usually over a confidential topic. The so-called confidential information is explicitly stated in the document, whose main purpose is to allow both parties to continue their relationship without the risk of leaking sensitive information.

Using a template, compared to making an NDA from scratch, will ensure the legal safety of your company, avoiding any legal loopholes and making sure that the contract is clear in its clauses. Do not risk all the hard work you have put towards your business with a poorly made agreement. Protect your company’s safety and explore your relation-making opportunities risk-free with the Business-in-a-Box templates.

As we previously stated, having NDAs for your information can be crucial for your business. Say you have a process, piece of information, or research that your company values. It is best to protect it using NDA agreement templates with the involved parties. It will make your company stable and secure. Usually, crafting a nondisclosure agreement is a complex issue, but Business-in-a-Box makes it simple with its professionally crafted templates.

On this page, you can educate yourself about the decision-making process that goes into protecting your information via one of these agreements. Business-in-a-Box has years of experience providing businesses with industry-grade materials that will elevate your standards of business and will improve your practices in the long-term. Check out our other legal agreement template.

Mutual NDA agreements are when two or more parties sign an NDA that allows them to share the secret information together while binding them to not share it with anyone else. Unilateral NDAs are characterized by a single party signing and promising not to share the information. The party signing any of these types of NDAs can be either entities or individuals.

Choosing whether your NDA agreement templates should be mutual or unilateral depends on which type of information you need to protect. If we take the example of a secret food formula, the select team working on improving it or supervising its use will need to sign a mutual NDA, while if maybe a particular member of an analysis team just made a breakthrough, you might want to utilize the unilateral version.

Purpose of an NDA

The purpose of the nondisclosure agreement is not only to protect the information with a legally binding resource. It makes the business owner feel safer about the intelligence that its company handles and creates, and it allows for better decision-making once that they are certain that all that is intended to be secret will be kept secret.

If we consider the case of mutual NDAs, it is crucial that you allow employees of your firm to do all sorts of tasks that you need to assign. Confidential information barriers can make this very complex to put in practice, because it either does not allow full efficient collaboration, or it risks leaking details that if made public will subtract considerable value from your firm.

We ensure that these purposes are completely fulfilled using our top-quality templates that do the heavy lifting for you, taking care of the minor details so that you can just fill in your information and get started with the important parts of your company.

What to include in an NDA

As a legally binding document, an NDA should be treated with importance, respecting its rules and restrictions. Understanding what to include in your NDA is half of the puzzle, you should have a clear idea of the kind of partner that you are working with as well as having a complete image of what you deem competitively sensitive information. The format should be explicit, but direct, making sure the material and the timeframe are defined and that the intentions of both parties are aligned.

Below, you will find a general description of what should and should not be included in your agreement.

How to write an NDA

Since understanding the components is the first step towards creating a functional NDA, here you will find a brief explanation of its essential components. Thanks to Business-in-a-Box you will have access to numerous non-disclosure agreement templates. To better understand the crucial elements, sign up to Business-in-a-Box and get your sample now!

Considering that an NDA is a legal document and not something that an investor would probably have a look at, the introduction is more of a statement disclosing the parties and the confidential relationship that they enter. The disclosing party is the owner of the information and the one that is interested in keeping it confidential. The receiving party is the one legally bound to not share it with anyone.

This part is what makes the NDA mutual. If left out, the deal is considered unilateral and it will only bind one party. It is important that you consider carefully which type of NDA you require for your confidential information.

The primary objective of an NDA is to protect trade secrets and allow both parties to function without fear, thus there are three main ways to define what constitutes confidential information.

The best approach varies from company to company, for example, if your business is centred around a certain area, why not disclose the categories you want to protect? Or if you work with a specific patent or recipe, you can specifically identify the components that you wish to remain secret.

As powerful as an NDA can be, it also has its limitations, information that the receiving party developed or obtained through legal means is outside the boundaries of the restriction, the same applies to public information or information that becomes public without the intervention of the receiving party or its representatives. All of this information, by law, cannot be included as part of the “confidential” information and the contract is bound to these kinds of legal restrictions regardless of the agreement, so, in order to avoid any confusion, they are also usually included, clarifying that the information is not a trade secret.

In non-disclosure agreement templates, everything revolves around the confidentiality and secrecy that the receiving party must maintain towards the established competitively sensitive material. Establishing said obligations is the core of the agreement and in some cases, it is important to further details the obligations, such as highlighting the responsibility to return additional information derived from a trade secret or, when dealing with a corporation instead of an individual, you may also want to limit the contact to only personnel that is bound by the NDA.

The more complex the parties or the trade secrets are, the more complex and detailed the agreement since additional restrictions and requirements may be implemented to fit your specific needs.

4. Duration of the NDA

While all the above parts center around the information and how it should be treated, this section details the duration of the partnership. Here you will find three alternatives that will help you limit the duration of your NDA.

The third option allows you to set a conditional timeframe, for example, if you desire the information to not be disclosed until it is not deemed as “confidential” anymore.

It is also important to note that the duration often requires negotiation. This is because the disclosing party will tend to favour long or indefinite periods, while the receiving party will favour the opposite end of the spectrum.

It is highly suggested that you fill this section with great care, as giving off the wrong impression can hurt the image of your business or give misleading ideas regarding your connections and business relations.

This section is particularly important in the case that your NDA must be defended in court. Here, you can disclose which parts of the agreement are separable from the whole contract. This ensures that if some part of your document is ruled invalid by a judge, your entire NDA does not get voided.

A severability clause is crucial for almost any contract, and so, it needs to be up to industry-standard to defend your information in case it is under threat. Luckily, Business-in-a-box has you covered with an airtight NDA for your business.

The waiver lets you choose when you want to sue the receiving party for a known violation of this NDA. Without the waiver, offences may “let slip” without actual remuneration to yourself, which you clearly do not want. Say for example, that in a moment in time, it was not convenient for you to go to court for a breach in the NDA. The other party can no longer defend itself under the justification that you knew it beforehand and you did not act on it.

Employee NDAs are the standard type of nondisclosure agreement that a business makes its employees sign when they are first hired. This immunity notice makes sure that they can share trade secrets if your company is under investigation by suspicion of a certain crime or fraud. This clause states that you cannot sue your employer, whether you are found guilty or not.

Now that you understand the elements, as well as the need for well-written NDA agreement templates, you can take the leap and sign up to check out our 1900+ business templates. Streamline the paperwork process with this non-disclosure agreement template, and many more for other areas of your business.

All the Templates You Need to Plan, Start, Organize, Manage, Finance & Grow Your Business, in One Place.

Templates and Tools to Manage Every Aspect of Your Business.